Benue traditional rulers’ role as custodians of culture are agents of development, contributing to enhancing peace and order at the grassroots level contributing greatly to the affairs of the state.

Among such rulers are:

BENUE STATE GOVERNMENT ESTABLISHED A THREE-TIER TRADITIONAL COUNCIL SYSTEM THAT IS MADE UP OF: 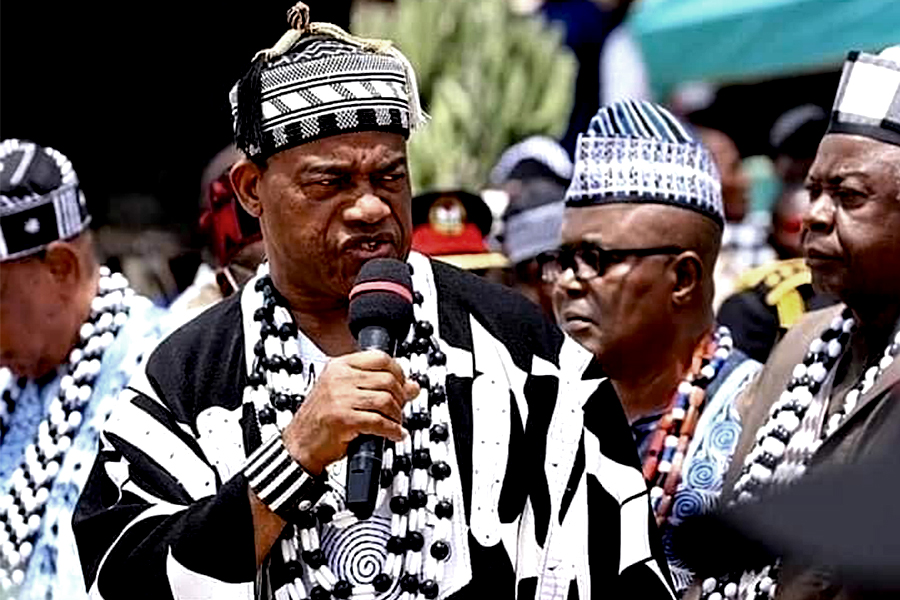 There are many publications, by different authors and scholars regarding the Tiv Traditional Administration, but one thing is certain, the Pre-colonial Tiv society was a decentralized society, unlike many other Kingdoms and Empires. The Tiv People were known for a gerontocratic system of governance, a government by the elders. Both the Executive and Judiciary were fused together under a Council of Villages, Kindreds, Clans, and Sub-clans of the same ancestry or roots, each one headed by the most elderly. Read more

There were no centralized structures that conferred administrative power in the hands of a person or chosen persons to exercise on behalf of the people. The Tiv people were described as independent people.

The Tiv people borrowed so many things in the course of migration, and many other things when they eventually settled down. Thus a flood gate swung open for the inflow of alien cults, spells, and titles, all of which were purchased by any person of means. It is believed that the Tiv People borrowed the culture of Chieftaincy from the Jukun-Wanu People of Kwararafa Kingdom (Predominantly now in Taraba State), the earliest Chieftaincy title in Tivland was “Tor Agbande” (Drum Chief), it used to be conferred by Aku Uka of Wukari. It was not passed over to anyone upon the death of the title holder, it was just for prestige.

On arrival, the British sought “Chiefs” through whom they will establish contacts with the people, those they identified with were given new titles of “Tor u Buter” (White’s Chiefs), which became the second group of chiefs that emerged in Tiv land, they were called “Tyoor”.

The Tiv people being ruled administratively by a non-Tiv Traditional Ruler did not go well with them after some time, they sought for their Paramount Ruler, led by the World War veterans, and one of the War veterans Orchivirigh HRM Makir Dzakpe, a retired Army Sergeant was subsequently installed as the First “Tor Tiv” (Begha u Tiv).

The Tiv society is today centralized, with a Paramount ruler, the Tor Tiv. His Royal Majesty (HRM) Prof. James Iorzua Ortese Ayatse, who hails from Ishangev-Ya, Kwande Local Government Area of Benue State, is the Paramount Ruler of the Tiv people; he took over the mantle in 2016 after the demise of his predecessor.

There were four (4) Tor Tiv who ruled before the one on the throne, they include:

After the Tor Tiv, there are six (6) First Class Chiefs known as “Tor” (Utor/Ator). This position in the hierarchy was recently introduced in the Tiv Traditional Administration by HRH Afred Akawe Torkula. After the Tor Tiv, the Tiv kingdom is divided into Six (6) intermediate areas(ruling houses). They are:

Each of the intermediate areas is ruled by a First Class Chief known as “Tor” (Utor/Ator) eg: Tor Jemgbagh, Tor Jechira, Tor Kwande, Tor Sankera, Tor Lobi, and Tor Gwer. Tor oversees its traditional affairs, their kingdom spans over two (2) or three (3)  Local Government Areas, as the case may be. They include:

Closely following the hierarchy to the Uter is the “Mue-Ter”, Mue means ‘Deputy’ in Tiv Language, these are the Third Class Chiefs. Each Local Government Area has two (2) of them, which implies there are twenty-eight (28) since there are fourteen (14) Tiv-Speaking Local Government Areas. For example: In Gwer East, we have the Mue-Ter Ngyeneg and Mue-Ter Ngyohov who are answerable to the Ter.

District Heads, ”Tyoor” (Utyombariorov) are next to the Mue-Ter. Identically, they are dressed wearing two beads necklaces and are in charge of the Districts as the Local Government Areas are divided into kindreds. The position of the District Head is one of the oldest traditional stools in Tiv Land. For example, Gwer East is divided into 14 kindreds ruled by 14 kindred heads, who are under the Mue-Ter.

At the lowest ladder of the present Organizational Structure is the “Ortar” (Mbatarev) who are the Kindred wearing One bead necklace. Each kindred is further divided into 5 clans superintendent by the ‘Ortar’ (Kindred) who reports to the Tyoor (Kindred head), this position has also been in existence for a long time.

There are the foot soldiers also, which at the moment are yet to be recognized by the Benue State Chieftaincy Laws, the “Tor Kpande” (Atorakpande), which means “Chief Tax Collectors”. They are however recognized by the communities and work closely with the Kindred Heads, they have also been in existence for a long time.

Och’Idoma is the First Class Chief of the Idoma Kingdom, heading Twenty Two Districts and One Hundred and Forty-Four Clans.

The Districts and Clans are administered by Districts Heads and Heads of Clan who are directly under the supervision and control of Och’Idoma, the Paramount Ruler. Read more

Och’Idoma is the spiritual head and custodian of Idoma Cultural Heritage and deities. Unlike in some parts of the country, where ascendancy to the throne is strictly limited to members of select royal families, in Idoma, any male Idoma holding a first degree is qualified to be an Ochi’ Idoma as long as he is of a sound mind without any disability. The kingship is rotated among the people of the districts and clans when the throne is vacant.

The Och’Idoma Palace is located in Otukpo Local Government Area of Benue State.

They are generally called ‘Oches’ in Idomaland.

Igede is the third largest ethnic group in Benue with Idoma been the second largest. In spite of their traditional and cultural differences, the relationship between Igede and Idoma is so glued together that they have one first class traditional ruler. That is the Ochi Idoma.

The Ochi Idoma reigns over all the Idomas and Igede as well. HRH Late Abraham Ajene Okpabi who was the second Ochi Idoma to ascend to the throne was of Igede descent. He ruled from 1960 to 1995.

In analysing the subject matter of traditional council in Igede land, both Oju and Obi Local Government Areas must be brought into the picture as Igede land encompasses the both of them. The traditional council in Igede as obtained in the previous set up prior to the present day is such that there are chiefs that represent each of the clans, there are also chiefs that represent each of the districts in Igede and then there is the overall chief called the ‘Adutu of Igede’ who was known as the number one person.

He was addressed as HRH the Adutu of Igede.

The current situation however is different owing to certain controversies that ensued upon the demise of the last Adutu of Igede (HRH Late chief Ikande Idikwu of blessed memory). As practiced currently, the Igede people have two separate co-equaled traditional heads in Igede land addressed as:

Next to the Ada’Oju as in the case of Oju Local Government Area under normal circumstances are the district chiefs, then there are clan (Beaded) chiefs and then followed by the ward heads. In some clans, the clan head and the ward head are vested in one man. In some others, the offices are separated and vested in two different persons.

3. The State Council of Chiefs

The State Council of Chiefs has the Tor Tiv, His Royal Majesty , Orchivirigh Professor James Ortese Ayatse as Chairman, with Och’Idoma, all Second Class Chiefs, and Chairmen of all Benue Local Government Areas as members.