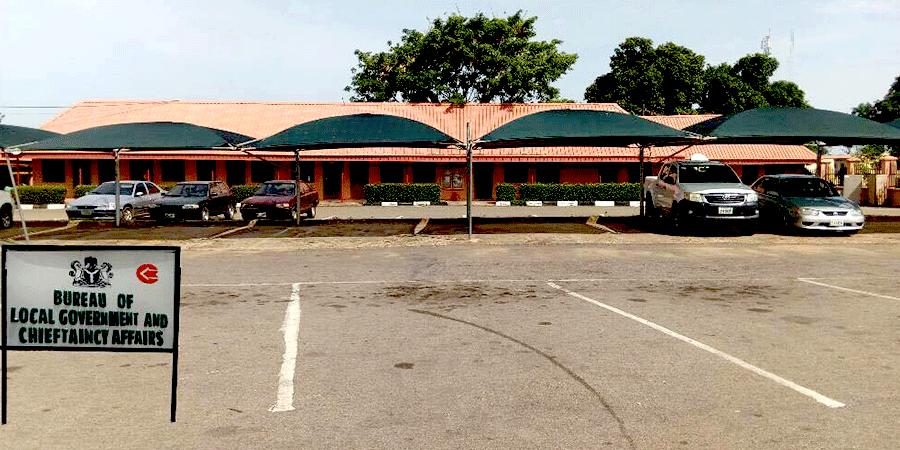 The bureau has the cabinet responsibilities of monitoring and the supervision of the 23 Local Government Councils in Benue State as well as chieftaincy matters.

Furthermore, the bureau collaborates with: The Local Government Service Commission, The Office of the Auditor-General(Local Government Areas), State Universal Basic Education Board, The Board of the Internal Revenue Service and Local Government Pension Board to derive synergy for a more effective coordination and development of the local governments in the state.

Functions Of The Ministry

In recognition of the role of this activity, Information Communication Technology, ICT in modern day transaction gave raise to the establishment of a computer village in each of the three senatorial zones of Benue State and operational.

The bureau is very conscious of the need to build the capacity of her staff as well as that of the local government council chairmen and other management staff for better service delivery. In regards, the bureau in conjunction with relevant consultants, organized several workshops/seminars for its directors as well as key functionaries of the local governments in order to sensitize them on their roles and responsibilities.

The review or guidelines on appointment and discipline of Traditional Rulers in Benue State is a core function of the bureau. This is also to enhance the reputation and the administration of the area traditional councils in Benue State. The bureau achieves this by sponsoring traditional rulers to both national and local workshops or seminars.

Provision of a Conducive Working Environment

The provision of a conducive working environment for staff of the bureau and the entire local government councils has continued to be a top priority. This covers facilities like toilets for staff and various council guests. Aesthetic of local government council premises has continued to improve with the interior of offices and acquisition of facilities like:

Air conditioners, Staff vehicles, Boreholes and Overhead tanks constructed and Pipe reticulation in other to make the premises conducive, while renovation of vital parastatals like the open and secret registries are executed.

This is an electronic medium for salary payment through which salaries of staff of the 23 Local Government Councils of Benue State are paid uniformly using a simple and single (enter) key on the computer. The system is to ensure efficiency, whereby staff salaries are paid on or before every 25th of every month.

This medium of payment is also intended to check cases of ghost workers and inflation of salary bills by local government councils.

The bureau usually sets up committees for severance gratuity of council members as a way of alleviating the hardship faced by council members. It is the duty of the bureau to ensure that past administrations owing such remunerations are held accountable.

This is a policy doubles as a function as well. It is a UNICEF assisted project with the Benue state government and the 23 local government areas providing counter funds. This is where the bureau comes in as it facilitate the release of funds to enable the a smooth take off. The implementation of Community Led Total Sanitation, CLTS is a coordination of bureau.

In order to ensure religious harmony, the bureau actively sponsors Christians and Muslims for pilgrimage exercises to Israel and Mecca respectively with beneficiaries drawn from all the 23 Local Government Areas of Benue State.

In view of the fact that some local government headquarters are not connected to public power source coupled with the epileptic nature where linked, the bureau distributes generator sets in all the 23 Local Government Council headquarters for now. This provides electricity to enhance transaction of government businesses and improve the working environment for the working comfort of the staff.

The bureau is pleased to unveil leaps it’s taken to ensure vital changes to ensure due process, accountability and Prudence in handling local government business.

Councils now hold statutory meetings as oppose to a situation where expenditures and policies are carried out in disregard to guidelines. Revenues have to be paid into banks before they’re expended. The bureau’s routine checks on chairmen ensuring that they don’t leave there local government headquarters without concrete permit. Equally, Staff orientation with the perception of ownership of the local government business is encouraged, this discourages truancy and acts that made the the local governments mere salary collection points, where staff were seen only when salaries are paid. Staff audit exercises has paid out handsomely for the bureau in detecting ghost workers and flushing them out.

Furthermore, the bureau’s synergy with the Benue state internal revenue services to improve on local internally generated revenue generation mechanism, refocused revenue collectors and managers towards prudence. The bureau is also in the business of ensuring due process in awards and accomplishments of contracts. More so that the inflow of subsidy reinvestment programme is coming in, we at the bureau have worked out modalities to put in place the local government tenders board for competency, accountability and safeguard of public funds.