In 2013, Prince Edwin Ochai created the Agila Social and Economic Carnival, with the aim of showcasing to the world the rich social, cultural and Economic endowment of the Idoma Nation through art, craft and social exhibitions.

The parades and other events happen during the three official days of carnival. The carnival kicks off on 23rd morning and stretches to the afternoon of the same day with procession/Parade in Otukpo followed by migration from Otukpo to Apa between the afternoon and evening of the first day. Later in the evening of the same day is another segment known as burn fire and performances by music artists. 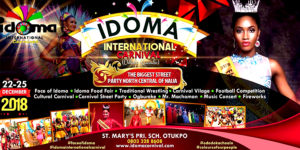 The Ochacho carnival is another mind-blowing carnival sponsored by Ochacho foundation and Ochacho Real homes owned by King Mohammed Odeh Adah (Ochacho). The Ochacho carnival whose maiden edition was in 2020 which held in Otukpo Local Government was inspired by the need to honour King Mohammed’s mother and to build a fun fair for the people of the Idoma Land during the Christmas season. The carnival is a free festival where the community is fed for seven days. The people are given food, and beverage and empowered during the carnival while being entertained by A-list performers like Davido, Teni, DBanj, 2Baba to mention but a few. The Ochacho is a carnival to enjoy the rich culture while honouring the Queen Ochacho and improving the lives of the residents.