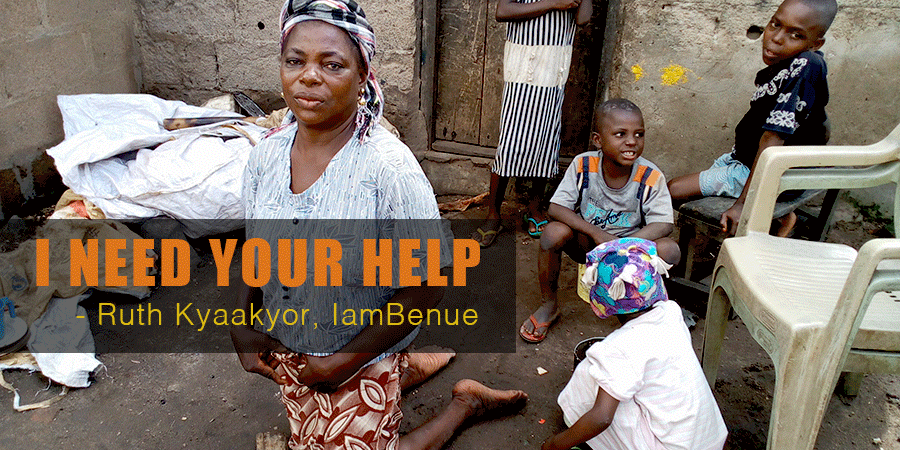 Why Ruth Kyaakyor needs your help

For a woman to be a cripple in our clime where hard work is encouraged with little room for begging is a heavy demand for a mother of six.

And for that same cripple to have lost her husband having five surviving children of school age, in fact below their teens, is what is described by a Nigerian musician as double wahala for dead body.

The plight of Mrs. Ruth Kyaakyor is one that will leave anyone with milk of human kindness in him to have misty eyes but not allowing tears flow so as not to make her feel worse than she is already.

Ruth is a woman of high spirit with an infectious smile doting her face while engaging in conversation. But please never allow such smiles deceive you as she is only putting up a bold face to cover her pains the fact which is only made real when you start a conversation with her.

As to how she came about her condition, she said “I was born like this; I have been a cripple from birth. I had always desired to be like my peers, as a child and a youth, I longed so much to participate in all pranks played by children but it was a mere wish. My parents didn’t tell me they took me to anywhere for remedy either maybe because since I was born like this they did not think I could ever get remedy or because they were poor.”

According to her, it was a thing of joy that a man came demanding for her hand in marriage and few years down the line, after having six children, the man whom she said was everything to her, passed away sending her to the world of uncertainty.

She said “when my husband was alive, he catered for me and my children very well even though he was not rich, but he worked hard to meet our needs.” According to her, life after the death of her breadwinner has been a harrowing one especially when she had to take care of five children, her aged mother and siblings.

Ruth said in order to make ends meet; she crawled about begging as the wheel chair a Good Samaritan gave her has spoilt for long. She added that part of proceeds from such alms, which she said could be up to N500 on a good day were used to buy firewood for sale at the front of her house and part used to buy food for the day.

According to her, she also sent her children to school because she knew that with education “they can become big people, the only problem is the school fees; it is a problem for me.”

Another great problem she said that she was contending with is that of accommodation. She revealed that the room she lives in was given to her free. That room itself can only go for a generator house but that is where about 10 of them live.

“I need a house that can contain my children, my mother and younger ones. The room I live in now is free but it is not a donation, the man gave me because he has pity on me and my children. I need help.”

Apart from house, the upkeep of her children and their future is uppermost in her mind, “my children like to go to school a lot but sometimes they are at home because of hunger.” As one who has already identified her trade, she said if she is given seed capital, “no matter how little, I can order for more firewood, sell them and take care of my children’s school fees and other needs.”

To also enhance her movement, she can as well do with a wheel chair. It is not a palatable thing to crawl on the floor especially now that the ground is wet.

“I hear that Mrs. Ortom is a kind-hearted woman who has mind of helping poor people especially disabled people like me, I plead with her to please come to my aid.” Ruth said as she used the edge of her wrapper to wipe her watery eyes.

Written by Achiri Igiri-West and James Ibechi, Makurdi
This is a direct source from: The Hawk Newspaper