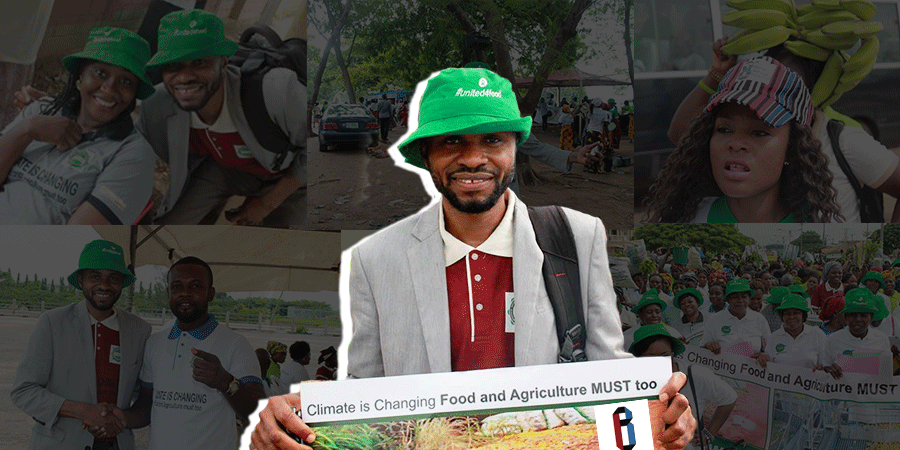 The International Day of the Rural Women; Benue State 2016

The Rural areas of Africa are the cradle for development and must be consciously and deliberately stimulated for the growth and development.

Africa dose no need more of grants or donation from international bodies. What Africa needs now is the deliberate development of her potentials (which mostly are Agrarian) and show casing some to the global markets.

As said before, a conscious and deliberate effort must be made to take Africa out of woods of poverty, disease, hunger and educational backwardness.

Africa Arise. Nobody will take Africa out of the wood except herself. It is now time for we the citizens, child of mother Africa to begin to look inwards on what can be done to unchain the continent.

Africa shall be great again. We have done it through agriculture and we can do it again.

The Groundnuts Pyramids in Kano (Northern Nigeria) and the cocoa of the Western region of Nigeria were used to develop Nigeria. Schools, Roads and Hospitals were built from those Pyramids of groundnuts and cocoa.

The International Day of the Rural Women was celebrated with great funfair and even pageantry in the city of Makurdi, the Benue State capital.

The commerating events took place between 15th -16th October, 2016. The first day of the events was marked with a walk to drum up support for the rural women and Agriculture.

The walk had women carrying placards and banners displaying urgent calls for increased budgeting for Agriculture by government, ‘climate is changing food and Agriculture must too’. ‘End food wastage’. ‘Prioritise Local Agro-factories’ ‘Prioritise women’ and many more.

The last day of the event was to Award a woman with the “Ogbonge woman” Award. The award is to encourage the rural women to empowered as to be more self-reliant. The award was the fourth in the series.

The event received sponsorship from OXFAM GB Nigeria, Trust Africa, and other donor agencies. The organizers of the event Nigerian Association of Women in Agriculture (NAWA).

My Thought as a Development Economist and Entrepreneur For African to be more forward economically and come of the … and woods of under development and poverty urgent deliberate steps must be taken. Where did we got it wrong as a country and a continent?

For Nigeria the discovery of crude oil rather than be a blessing became the bane (I don’t want to say a curse) of/on our country.

Proceeds from sell of crude oil over the year have not translated to development for the country. The proceeds have been corruptly embezzled by a corrupt and heartless few that have found themselves recesses of leadership or power.

Where did we get it wrong?

We got it all wrong where we refused to industrialized mechanize our agriculture. Simon Kolawole espoused my thoughts in a scintinlatily manner in his article ‘Agriculture Not Magic solution’…

If you are wondering how just one company, which manufactures chocolate, can earn seven times more than a whole country, which farms and exports the cocoa input, then you are asking the same question with me: Who agriculture alone don epp?

On ICCO’s list of the world’s top 10 companies in net revenue from chocolate, you have three from America, two from Japan, two from Switzerland, and one each from Luxemburg/Italy, Argentina and Turkey. None from Cote d’Ivoire, Ghana and Indonesia — the world’s three biggest producers of raw cocoa. There must be something that Hershey’s, Mars and Nestlé know that we don’t know as we keep planting cocoa.

To be fair, Cote d’Ivoire is waking up. In 2015, French chocolatier Cémoi opened a plant in Abidjan, the economic capital, to produce chocolate. President Alassane Ouattara, on touring the plant, said: “We want to be able to make chocolate for Ivoriens, for Africans and especially West Africans.” Ouattara (pronounced Wa-ta-ra) understands what we still don’t understand here: that Agriculture without industry is dead, being alone.

How could I buy cocoa worth $1m from you and make chocolate worth $10 million from it — and you think you are smart? If you are smart, you will start making the chocolate yourself and stop romanticising about the “good old days”.”

The Agriculture and solid mineral value chain most of urgency and necessity be development.

Mechanize farming, Harvest, Processing, Storage and conversion to end-products will be strengthen with the storage and processing the most critical. In my immediate Benue communities Oranges, Mangoes and Tomatoes Particularly waste year and year out. This must stop.

Credit facilities should be deliberately extended to the rural women to strengthen development at the cradle.

Access to finance must be made easy to the rural women. Government must put in place infrastructure that will strengthen development at the cradle. I am advocating a Bottom to Top approach for development. The Top to Bottom approach has not help us in Africa, and only a mad person expects a different result from doing the same thing.

Road must be built, rural electrification must be purged aggressively, schools must be built and equipped, hospitals must also be given the desired attention as to take basic primary health care to those at the cradle.

Africa and Nigeria needs her Mohammed Yunus the professor of economics, who in 2016, won the Noble peace prize for pioneering an economic system in which small, low-interest loans are extend to people (particularly women) who are enable to obtain a loan from a traditional bank His economic system is called the Grameen Surveys has shown that about 64 percent of Germeen borrowers who have been with Grameen Bank for five years or more have come out of poverty in 2006. While according to the World Bank, every year, 5 percent of Grameem borrowers especially women move out of poverty courtesy of Mohammed Yunus’s initiative which is now spanning a global movement.

My call is now to the wealthing of Africa and Nigeria to go back to the cradle of development, which is the rural areas. The Tony Elumelu’s of this world should take a deep look at taking credit facilities to rural women.

Africa and Nigeria shall achieve greatness. Yes she can.