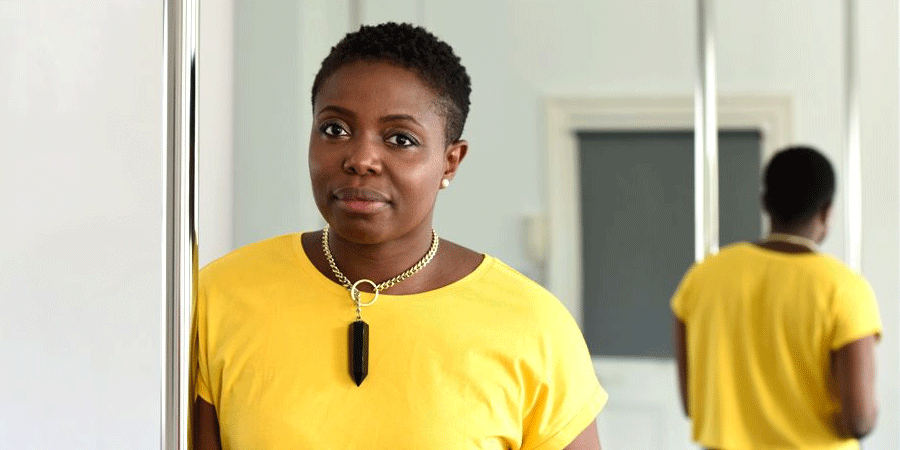 A while ago I thought, why does it seem that most prominent black female activists seem to be dating white men? Then I had a moment of introspection where I thought, hang on, I’m one of those women.

I speak up about racism and sexism affecting black women. I have an online following. And I have a white fiance who rarely features in my social media spaces.

To explain where I stand, I need to tell you about my childhood.

I was born in Nigeria but moved to south London when I was five. I grew up in Peckham in a predominantly black neighbourhood – they call it Little Lagos.

It was almost as if I hadn’t left West Africa. I saw so many people who looked like me in Peckham, they were calling out to each other in the street. There were people there my mum had grown up within Lagos. The streets looked different. The buildings looked different but it all felt very familiar.

I had left my father in Lagos to move in with my mother, but by the time I got here, she had a new partner and was pregnant. I was moving into a family unit that I wasn’t part of. Often, I felt like an outsider in my own home.

I thought about my identity from a very young age. When I got to this country one of the first things I remember is speaking Yoruba in the car with my mum. My stepdad, who was also Nigerian, turned to me and said: “Start speaking English. You’re in England now, you’re not a Bush Girl.” I knew it wasn’t malicious but I understood then that he had a desire to assimilate to British culture. I started thinking: “I better start speaking like an English girl.”

But around young people my own age there was a different set of challenges.

Around my black friends, if I enunciated my words I was asked: “Why do you speak like a white girl?”

I went to a school with a mixture of students – Jamaican, Ghanaian, white British – and I excelled academically and at sports. And there, some white children would laugh at my pronunciation. These things started making me realise that I didn’t sound like everybody else.

But there were also times when I felt very welcome.

There was an Irish woman, an informal babysitter, who would pick me up from school. I’d eat Nutella on toast with her children at her home while I waited for my mum to come and collect me. I felt comfortable with them.

When we got to the age of dating, my attraction to people wasn’t based on ethnicity. But it was for some of my friends. If I said that I found a white guy cute some of my black friends would go: “Ugh! No way! Yuck!” I would think: “Why is that their reaction? We’re all in the school together. We’re all in it together.”

My first white boyfriend was when I was a teenager. We didn’t talk about race. I think that was mainly because we talked on MSN messenger. I lived online. A lot of my growing up, development and expression happened online. It was a different kind of connection. In some ways, a more honest form of communication.

But going out with a white guy was a whole new cultural experience. So different to my Nigerian upbringing. Culturally, my home was Nigerian, it wasn’t British.

While I dated both black and white boys, I couldn’t ignore the fact that I felt more comfortable with black boys. Dating them felt more familiar. It was like home. We had a shorthand.

I didn’t have to explain what okra or a plantain was or why they needed, out of respect, to call my mum Aunty.

With the white English men I dated, I often felt sexually fetishised and often patronised. With one serious boyfriend, it bothered me that he called my mum “Christine”, even when I specifically told him to call her Aunty. He wasn’t respectful enough to adapt to that part of my culture.

The same guy often put me down. One day he and I were at a pond, and I said: “Oh wow, look at that duck!” and he turned to me and replied: “That’s a Canadian Goose. I can’t believe you haven’t been taught that.” It was the way he said it. There was an undercurrent to his words. A superiority. That was a big moment for me.

I made the decision to stop dating white English guys.

I met my fiance online, on a dating site. On my profile, I had put an instruction to not contact me unless they had closely read my bio and understood my passions and hobbies. He sent me a message saying: “Would you like to go for a coffee sometime?” I replied saying: “I specifically said ‘Read my profile and reply only if you share my interests’.” He replied: “But I did read your profile. I liked it. I want to meet you for coffee.” He told me that as he’s Polish, he speaks directly. He wasn’t going to woo me with a War and Peace-length love letter.

From our first date, we got on. I thought: “Oh he’s so handsome.” But it was more than that. We could talk so easily with each other. His colour didn’t factor in my attraction. But there is a huge difference between going out with a white Polish man and a white English man.

When people think about interracial relationships, very rarely do they think of the nuance. Poland didn’t have independence for more than a hundred years before 1918. Historically it’s a country with people that know what it’s like to be governed by outsiders.

In my experience, many of the white English guys (and I say English because I haven’t had experience around Welsh, Scottish or Irish men) I knew didn’t know their true history. They don’t know about much about the transatlantic slave trade or colonisation. These parts of history aren’t delved into secondary schools. If they were, many people might have a better understanding of the minority experience.

But what I’ve found with my fiance, and many Polish people I’ve met through him is a deep understanding of being a minority and facing prejudice in this country. That way we can relate to each other. My partner grew up under communism in a working-class family, and that place of scarcity is something I can relate to as well. He’s a migrant like me. He came here to build a life for himself. I wouldn’t have that level of compatibility with a white English man.

This doesn’t mean I haven’t experienced racism from Polish people. I was at the beach in Poland when a man called me the Polish version of the N-word. Luckily for me, I’m not dating those people, I’m dating this person.

Love is not colour blind. I worry for people in interracial relationships who say, “I don’t see colour.” Because at some point you will have to face it. Your kids will have to face it. It’s exhausting having to explain your life and culture to someone who hasn’t lived it. There’s no shorthand. You often have to explain certain cultural ways before you can enjoy it.

But we like each other so much that we have decided to tackle these differences together.

Interracial relationships aren’t groundbreaking. But interracial couples are popular on YouTube. They call them “swirl” couples and they amass big followings by documenting their day-to-day lives. But it’s lazy to say that these visible relationships are single-handedly changing the tapestry of our society. I often think they’re a marketing ploy. I didn’t want to do that with mine.

There’s another reason I rarely show my partner on social media.

And while in some ways I understand that it’s natural for people to be interested in other people’s relationships, the accusations of hiding my white partner – which blew up when I appeared on the panel of an American YouTube show – are a case of misogynoir.

Misogynoir is misogyny aimed specifically at black women where race and gender both play roles in bias. It’s come more into our lexicon, especially online, recently when a study found that politician Diane Abbott alone received almost half of all the abusive tweets sent to female MPs in the run-up to our last general election. The language used was a marriage of sexism and racism, and it was even perpetuated by many people of colour, who saw her as an easy target. Serena Williams is also the recipient of this kind of abuse.

A lot of attacks on black women are overlooked because it’s seen that our lives are less important.

I’m aware of discourse that says that black women who date outside their race do so because of internalised self-loathing, that somehow they think the approval of a white man makes them more valid in a society that traditionally doesn’t amplify black women as desirable.

Others say that people date outside their race because more education and career success means that you’re around people of different races – more than you would be in Little Lagos. There may be some truth in that but not entirely. I met my partner online, as many people do these days. The digital arena has changed a lot for us.

In terms of black influencers “hiding” their white boyfriends, I have to say that I can’t and won’t speak for all other black women, just like I wouldn’t want them to speak for me. We are not singular. Our stories are more individual.

For me, I date a white man and I don’t document our daily life on social media purely because that is my choice.

Society’s standards for what’s acceptable for black women are impossible to meet. You have to be funny. And accessible. And sexual. But not too sexual. Honest. But not outspoken. And also date who people think you ought to date.

I decided a long time ago that I’m not doing that for anybody.

This article was originally published on BBC Stories