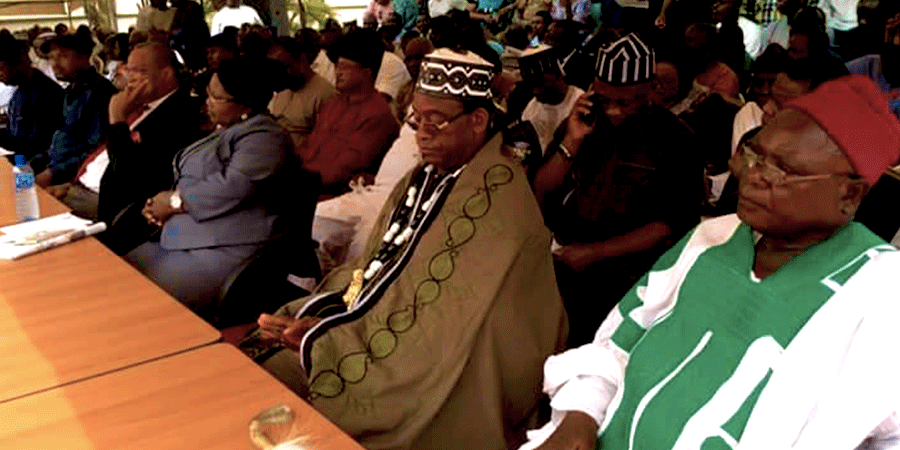 Is it an offence that God brought us as Benue people to this land? Is it an offence that we have chosen agriculture as our main occupation? What have our people done wrong to deserve the frequent attacks? Our resolve is that open grazing of cattle and farming cannot go together. The solution is ranching”

The simple truth is that, Farming and grazing cannot go together,it has gotten to a point that the green grasses are not there and the Fulanis are feeding on our seedlings breaking our balms.Your Excellency, let me Commend you for the steps you have taken but while commending the security agencies, I wish to fault this impression by the security agencies that any crash between the farmers and the herdsmen, the farmers are at fault.Want to appeal to the federal Government to come to our aid to end this carnage and to provide relief materials to the victims.

A bill prohibiting open grazing in the Senate is sponsored by Distinguished Senator Barnabas Gemade, in the house of Representatives it is sponsored by Hon. Dickson Tarkighir but the bills are going through huddles by very powerful Nigerians. What we need now is your prayers and not the blame game on social media. My Governor, am so proud to identify with you. I was so impressed when I saw you on TV last week telling the entire nation that we have no land for grazing.

We are inviting Benue sons at home and in the diaspora to participate in the forthcoming public hearing beginning tomorrow and make their inputs in the proposed anti public grazing bill submitted to the assembly by the Governor of Benue State – Speaker Benue State House of Assembly represented by the majority leader.

Your Excellency Sir, please, help convey our message to Mr. President to handle the issue of Fulani attacks the same way he handled Boko haram.

From all indications,the number of cattle owned by Fulanis is too much and since the Fulanis can’t stay in their places of origin as a result of the number of their held, the federal government should device a means of controlling the birthrate of cattle.

The Fulanis should go back to their home and leave Benue people alone.

Enemies are surrounding us, we are seating on a time bomb that has started exploding already. The Fulanis are out to take over the rich Benue Valley. I advocate for a very strong and powerful delegation to Mr. President to intimate him that we are supportive of his diversification agenda but we cannot do this when we are killed on a daily basis and people taking over our lands.

“Let me assure all the stakeholders that their recommendations here will be implemented. I still maintain that even though, we are in Nigeria and every citizen has the right to live in any part of the country as enshrined in the Constitution but the violent Fulani , criminal and killer Fulani Herdsmen carrying weapons should be chased out of Benue State by security agencies”