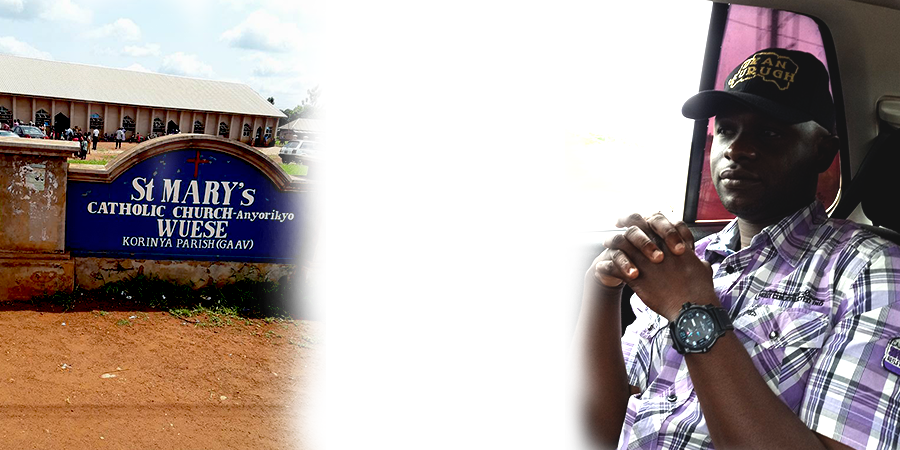 AIM (Advocate for the Interest of the Masses)

We missed church on this day; a Sunday, but our convictions remain that, doing the humanitarian works of love, there shouldn’t be regrets and we gladly left the shores of Makurdi by 7am, traveling, first to Anyiorikyo-Wuese, deep into the hinterlands of Konshisha Local Government Area. We plied a not so good road but for courage and the determination of the essence of journey, we finally arrived our first destination, St. Mary’s Catholic Church, Anyiorikyo-Wuese, Konshisha Local Government.

We arrived at a time when the mass had been completed but other announcements were still ongoing and we were ushered into the church. We made a presentation of a wheelchair to 15 year old Kpadoo Iorlaha and a pair of crutches to 7 year old Tersen Orbunde. For Kpadoo Iorlaha, she was involved in a fatal car accident alongside her brother who died on the spot while she lost two of her legs in the process. The nature of her movement is pathetic as she craws on her hands as her only supporting limbs. She is a primary school pupil of Brothers Nursery and Primary School, Alabusa in Konshisha. Her parents are peasant farmers.

For little Tersen Orbunde who is 7 years old, he was hit by a bike and suffered two fractures on his legs. Unfortunately, due to the porous nature of community medication, only one of the fractures was diagnosed and treated. While treatment was ongoing, the other undiscovered fracture was rotten and upon discovery, amputation was the last resort to keep him alive.

Informed of our mission, the community of catholic worshipers cheered in excitement as most of them had observed without help, the condition of the poor children who needed help. We made our humble presentations which have come with love from the efforts of an overseas based Rev. Fr. Stephen, who is of Benue State origin. The priest in charge of the church, Rev. Fr. Godwin Omanga blessed us with prayers and wishes of goodluck, as the worshipers clapped in admiration of the gesture and prayed for our safe journey, welfare and good luck.

Done at Konshisha, we plied a terrible route from Wuese down to Ihugh and from Ihugh to Adikpo down to Ugbema where we were led to Igba-Ikyor, Kyanev which is under Ushongo Local Government but a stone-throw away from Ugbema which is under Buruku Local Government, all of Benue state. It was a pathetic sight seeing 43 years Chi Ahua walk on all his limbs; hands and legs altogether. By the time we arrived his destination, it was already raining and we had to contend hastily with the rain to make the donation.

Chi’s joy knew no bounds as he celebrated his new found car in fashion and style. He was excited so as the people who sat around to share in his moment of happiness. We concluded our business and departed in peace for Makurdi.

At this juncture, permit me to thank in earnest Rev. Fr. Stephen who is a doing a great job in adding value to the lives of the less privileged back home. May God replenish you in fashionable style and give you the the strength to do more. I wish to thank those who made the journey with me Mr. Fanen Ahire and Mr. Raphael Ashwe who have been a source of inspiration on the works for humanity. To you, my social media community, especially Akaan Terhemba and Ikyaagba Dooshima who called my attention to these children’s plight and must tell you, the work for humanity has just begun. Give me needed support to uplift humanity and may God always bless us, amen.