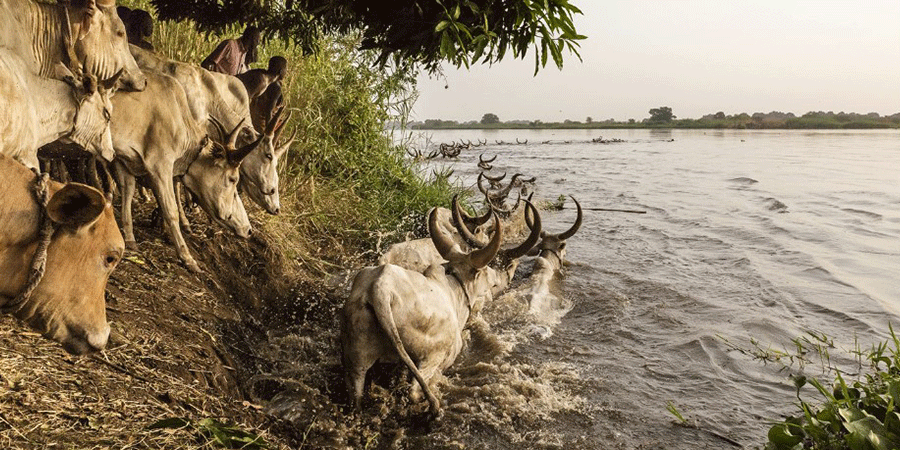 Fulani This, Fulani That

The planting season is almost here again in rural Benue, and once more, as it has become common in recent past, the farmers are afraid and uncertain. They are afraid of the nomadic Fulanis who descend, year in year out, with their cattle from the far north into the marshes of the middle belt to graze.

From time immemorial, the relationship between a herder of animals like cattle and a farmer of crops have been apart. Ordinarily, we should naturally expect constant skirmishes where these two groups “co-habit”. The green crops and grasses, look same to instinctive creatures like cattle. As a result, whenever animals of the Fulanis stray or destroy the crops of, say a Tiv farmer, crisis must ensue.

These ancient models have failed now. Today, the Fulani man is to most Tiv men, a demon-a troublesome lot carrying guns and matchetes, cutting throats of the innocents and killing women and children so that his cattle will have grasses to eat.

True, in almost all the 23 Local government areas of Benue State, in recent years, the Fulani Cattle men have cut throats and killed poor innocent farmers, but I have observed an evil. This evil is deeper than the Fulani this, Fulani that simplistic explanations to these incessant Fulani attacks. It gives a light to why the Fulanis are winning. Or for the lack of balance in the relationship, that once flourished between the Tiv and Fulani.

The Fulanis move freely in Tivland today and cause havoc partly because, the Tiv elites have refused to become farmers. They are comfortable being big politicians, occupying big offices in the cities, or big shots in the corporate world, or high ranking security officers or in academics, unlike their forefathers who had only one source of wealth, ‘shin nya’, and so were ready to guide it.

On the other hand, whoever he is, be he a president of a country or a governor of a state, the Fulani man is first and foremost a cattle farmer. Yes, a proxy farmer. So the life of all Fulanis world wide are inspired by the politics of the cattle. This politics, to an outsider, looks stupid and foolish, but Fulanis live it and proudly so. And they work for it and use their positions of influence to nourish it.

While the Tiv elites have spent most of their times discussing politics of human beings, as important as that is, the Fulanis dwell mostly on “their cattle” – so when a cow misses in a remote village around the Cameroon Mountains, the whole of Fulaniland world wide is affected. That can not be said of Tiv world. The colossal havoc by the Fulanis, as monumental as it could be, it is not only under reported, it is detached from Tiv essence.

Today, 80 per cent of Benue land lies uncultivable. Why? Lack of tractors, first. The Tiv powerful and men of means have not only abandoned the lands; government have perennially, refused or been unable to make life easier, through the provision of common farm inputs, for the stubborn local farmers in the rural areas.

This disdain and rejection of land by the Tiv elites/and government over time is what has given the Fulanis an advantage over us. Today, far from us, powerful Fulanis are negotiating through their proxies, the future of our arable lands with the poor locals on daily basis. Believe me, the crisis will report gleefully on social media today, are not the causes – mere symptoms of a grave issue.

Q: Dr George Akume, if Fulani attack Guma or Gwer West Local Government areas, will any of your rice farms be affected?

Q: Distinguished Senator Barns Gemade, do you have a commensurate farm?

But see what happened last week. The Tiv people world wide had arranged their biggest stage. It was the coronation of the Tor Tiv and as speeches came in, I observed two, particularly.

The speech of Alhaji Atiku Abubakar, symbol of Fulani wealth and political power, and Sultan of Sokoto, symbol of Fulani Culture and royalty. The core of their speeches centred on cattle. Atiku, from Makurdi to Gboko, saw many cattle and was startled. Do you blame him because he didn’t see the vast arable lands lying fallow? I don’t think we shall be being fair to him, if we do. The vast lands is for our the Tiv elites to see.

The speech I found rather disturbing was that made by the Sultan of Sokoto, Saad Abubakar III. He assured the new Tor Tiv, HRM, Orchivirigh Professor James Ortese Iorzua Ayatse, Tor Tiv V that he would join hands with him to stop the herders/farmers crisis, but with a caveat, that first, “we have forgiven the Tiv for the cows they have stolen from us”, but that, the Tiv must promise “to stop stealing our cattle”. This was our big stage, this was the accusation.

No Tiv man responded to the Sultan. Subsequent speakers, behaved as if everything was okay. As if the Sultan was right. These are the issues. The Sultan keeps cattle, and perhaps, he receives daily briefings from his proxies about stolen cattle. But because of this disconnect, no Tiv elite can stand up with facts, maybe. Was it not a similar scenario in 2014 in the National Confab? One Justice Lawal Gunmi, Emir of Gunmi made same allegations. He spoke of government designating lands in all states for the Fulanis to graze.

In the confab were Former Senate President, Dr Iyorchia Ayu, a powerful Tiv man in government and politics and Senator Jack Tolley Gyado, a Tiv industrialist and man of stupendous wealth, but they had no responses to Gunmi. Rather, it was only Dr Magdalyn Dura, who constituted a lone voice.

So the solution of this matter begins with Tiv people returning to agriculture, one way or the other. We have abandoned our lands, covertly or overtly to the Fulanis. This does not mean that the government shouldn’t do its primary duty of protecting its citizens from all forms of attacks, in the interim.

One thought on “Fulani This, Fulani That”