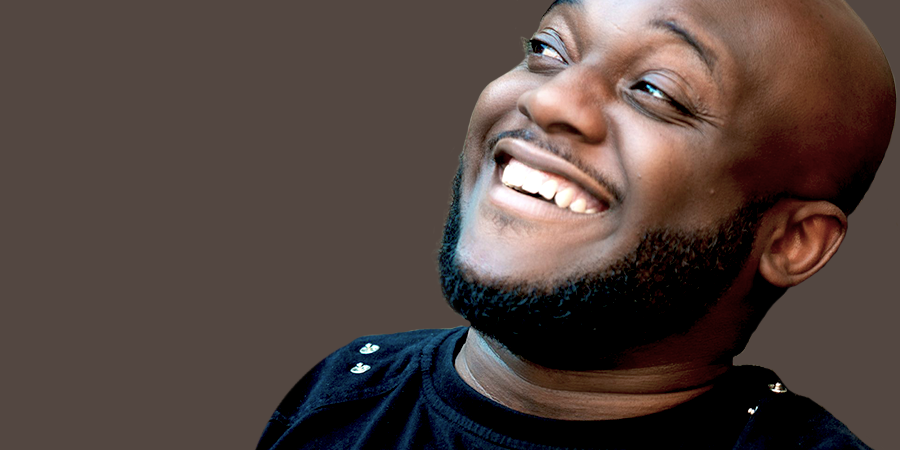 I was born on May 27th in Menomie, Wisconsin, U.S.A. My parents who were students in the States at the time took me back to Nigeria at age 1, so the teenage and early part of my adult life was formed in Nigeria, especially at High Level, Makurdi. As a kid, I always had a thing for music, acting and anything related to the arts or entertainment.

In the early ’90s,  Terver Malu, Anyaka Ato, myself and a few other peers were chosen by NTA Makurdi to participate in a National Film fest, a short film titled ‘The Cake’. My love for acting grew, so much so that most times I would go to Wurukum roundabout and try to mimic my favourite action movie stars. I did this alongside my best friend Boniface Tsendii, re-enacting action scenes we may have seen Jackie Chan, Bruce Lee or any of the Indian action figures played.

I battled with the concept of a family even up to my adult years because I came from a broken home. My parents had grown apart and separated when I was just a little child. Dad started a new family, and Mum tried to cope and find her path as well, so I was raised by my aunty along with other kids in the house. My aunty was business savvy, though not formally educated. She sold beer, pounded yam and pepper soup from her house and I would join in the trade after school hours, (if I wasn’t too busy playing soccer on Uke Wende or Iyorkyaa Ako streets lol). This is how she fed us and paid my school fees. It is here that I was exposed to funny street language and everything in between… I wouldn’t trade it for the world. Most times were spent with my dad in Makurdi, other times were spent with my mother in Jos, and then there were other times spent in the village with my step mum and my half-siblings. I learnt how to read and write in Tiv at a young age because my aunt didn’t speak or write English. I had to read and write and translate some of her letters. I hated it at first but then it became exciting.

I lost my father in 2001. I never quite got over the shock. I got into BSU the following year. At BSU, I performed in talent shows singing on stages and collaborating with my good friend Ahangba Audu (aka Doggy Slosh). We created quite a buzz around town until 2003 when ASUU went on a strike, and my Step-dad flew me back to the States to continue my University education. I have gone by different stage names and Nicknames such as T.S, Xzyle, Tor Philibu and Shele. These days I just go by King Tersoo.

I attended American Intercontinental University in Atlanta where I majored in Media Production with Concentration in audio and film production. About 3 years ago while watching a Nigerian movie on YouTube, it struck me that our Tiv people don’t have a lot of voice or representation in the entertainment industry. Most of the movies are usually in Yoruba, Igbo, Hausa or other languages including popular English. So I started creating little comedy skits using my Android phone and posting on Instagram and Facebook. It is here that the idea of Cletus/Cletus and Romanus was originated. I reached out to my good friend and brother Tersurshima Orsar (@tersurshima) and he agreed to sacrifice his time and talent to play the role of Romanus. Together we created concepts and ideas to put out skits as time permits.

I love making and seeing people laugh. It makes me happy to be a little part of someone’s smile or laughter. The love I have for Benue and my people is priceless. My humble vision is to represent my Tiv people by throwing light on our rich arts and culture in the diaspora, back home in Nigeria and the entire world through film, music and many other positive platforms. I also want this situation to create more avenues for other younger talents from Benue, and Nigeria as a whole in the nearest future.