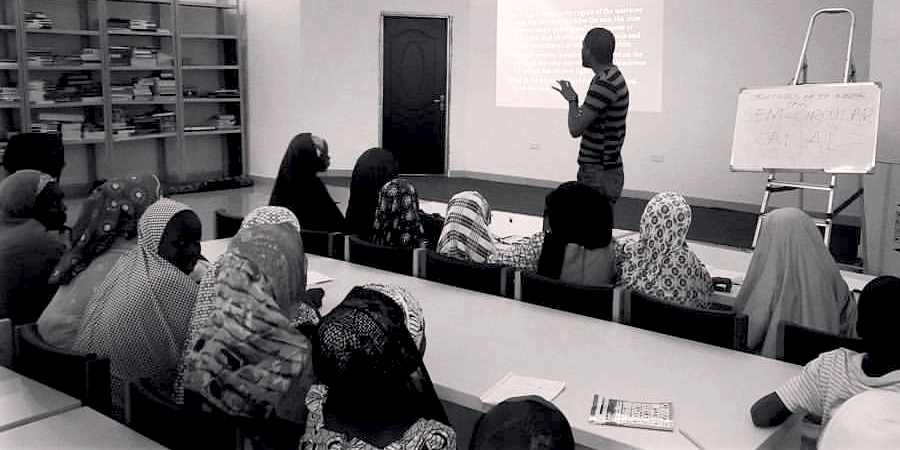 “If not now, when? If not you, who?”, Get to know Brother Shadrach L. Mtile

Shadrach Lubem Mtile is a 29 -year old Nigerian, who hails from Buruku Local Government of Benue State. He is currently the program Coordinator at Bindir Knowledge Center in Yola, Adamawa State, a local Non-governmental organization that is focused on providing free access to quality education and learning resources to children who are out of school and who are in public schools. He has a Bachelor of Science degree in Human Geography from Benue State University Makurdi, a Diploma in Software Development, and Currently undergoing a Master’s Program at the Modibbo Adama University of Technology, Yola where he studies Peace and Conflict Resolution. Shadrach is also one of the founding members of Mentor Africa Initiative, a local non-governmental organization that focuses on providing out of school children and children in public schools with access to quality education, skills acquisition, and mentoring. He is a tireless advocate for gender equality and his work has been greatly influenced by his personal life experiences. Having been born and raised in Northern Nigeria as the only boy amidst many girls, he experienced first-hand discrimination against women which propelled his passion for the girl child.

He resides in Adamawa State, located in the Northeastern part of Nigeria which has been ravaged by the activities of Boko Haram in the recent past. This has afforded him opportunities to tackle the growing problem of education deficit and skill acquisition among youngsters in the community around him. There still remain lesser girls in schools in Nigeria, with 60% of the 10.5 million children out of school being girls. Shadrach has pioneered various projects intended to boost literacy among girls in Adamawa state especially.

Shadrach grew up in the slums which get the least attention and so is very familiar with the terrain and has also put in work in research. He does not just know what he wants to do but he also knows exactly how he wants to do it.

He has worked with Almajiri children in Yola for about 3 years now. These are out of school children, living on the street, and who beg as a source of livelihood.  Shadrach has, through Mentor Africa Initiative, provided over 316 girls and boys with access to quality education, while leveraging technology in the process through his “Education for All” project in Adamawa state. He has done this through providing these children with basic computer skills acquisition and also utilized an educational application that is Hausa-friendly and which teaches the children how to speak English. This project has successfully helped the recipients become more technologically inclined in this age of technology.

Another of Shadrach’s projects is the “Chess Mistress” project which is his non-formal approach towards education specifically for internally displaced girls and boys at various IDP camps. His focus is however mostly on the girl child. This project began in February 2018 at the St. Theresa’s IDP Camp in Yola with about 50 children under its umbrella. The project is run by Shadrach and a team of other committed young people who volunteer alongside him. At the beginning of the project, inspirational movies such as the ‘Queen of Katwe’ are screened at the camps and then the team proceeds to teach the children at the camps to play Chess and Scrabble for a stipulated number of months. The aim of the project is to use this learning/teaching approach to promote literacy and critical thinking skills, and to boost self-confidence and healthy competition among the girls and the boys in these camps.

Yet another girl-focused project of his, tagged the ‘Northern Girls Code,’ was piloted in the year 2017 in Yola, Adamawa State as well. The project is an annual coding summer camp for girls. The sole purpose of this project is to teach the participants to code and to provide them with programming resources to enhance their skills. The end game is to encourage these learners to use technology to solve real-life problems in their community. In the maiden edition, the project hosted 35 girls between the ages of 16-24, some of which were out of school, secondary school graduates and university students as well. This year, the camp is currently hosting 39 participants ranging from 16-24 years and including some girls from the St. Theresa’s IDP Camp where he runs the “Chess Mistress” Project. Some of the participants had prior computer knowledge but some of them had to be taught from the scratch in order to better participate in the summer camp. The summer camp runs for a duration of six weeks and before the end of the camp, the ladies are to work together to develop an application which will solve an existing problem in their community. This year’s participants have chosen to develop an application for food delivery for a restaurant in Adamawa. It is evident that there are abundant benefits from this summer camp ranging from critical thinking, community service, creativity, computer literacy and opportunities for self-employment as well.

Shadrach intends to continue his work with the Almajiri children on a larger scale. He also intends to make the summer coding camp an annual project, expanding the reach to Northern girls outside Yola. He also plans to reach other IDP camps with the “Chess Mistress” project and to organize Chess and Scrabble tournaments between the IDP camps.

However, as with every other dream and vision comes challenges ranging from finance, resources and even sustainability but passion keeps him going as well solace at night when he goes to sleep knowing one more child is off the street or one more child somewhere actually learnt how to read as a result of the direct or indirect influence of one or more of his projects.

Shadrach grew up in the slums which get the least attention and so is very familiar with the terrain and has also put in work in research. He does not just know what he wants to do but he also knows exactly how he wants to do it. Shadrach believes that he owes it to himself and to society to “give back”. According to Hillel the Elder, “If not now, when? If not you, who?”

You too can do same. It begins from where you are, and the little you can do. If we all do our part, we can make so much change in so little time. We hope that Shadrach’s work inspires you to take up the challenge and just do it!