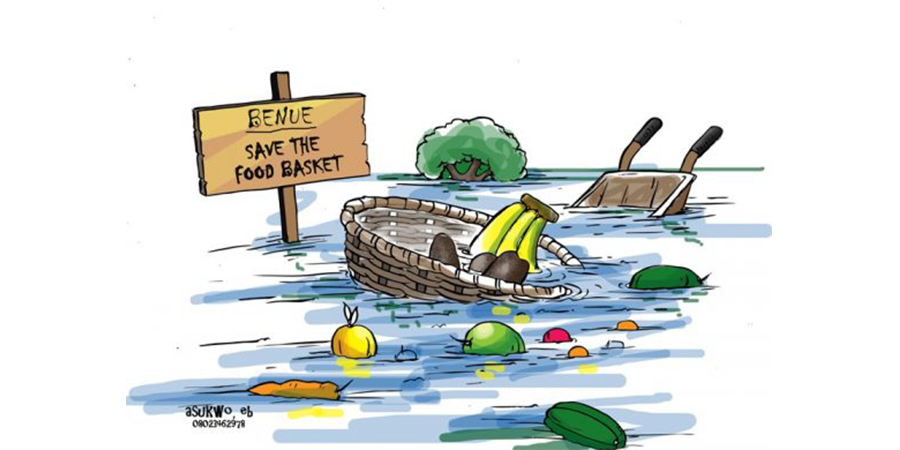 About yesterdays visit of the Vice President Prof. Yemi Osibanjo I want to take out time and thank him on this visit for being responsive enough to visit my dear state in a time so many of my friends, family members and relatives have been displaced by the recent flood.

This will only help open more economic activities in Benue state and improve our IGR. The recent flood in Makurdi was not caused by an over flown river Benue but is was caused by heavy rain fall, most areas that were affected were mostly areas that lacked good drainage channels.

So while it was raining they wasn’t free flow of water which resulted to the flood in most areas like Achusa, BIPC quarters Nyima etc.

Makurdi is the state capital and it is not properly planned, a lot of houses are built on streets while others are on drainages and sewage areas. There was an assessment carried out by the Benue state urban development which marked about 193 houses for demolition. But the question is do the people who are in power have the political will to execute this.

It took Nasir El-Rufai guts and courage to restructure Abuja and put it on the map to the present capital it is today. I hope the present administration told the VP yesterday that a contract to build a canal from Ishaya Bakut road down to river Benue and from B divison Police station down to industrial layout was abandoned by CAD Nigeria Ltd. If not there’s always an annual large scale flooding experienced in Nigeria following the release of water from the Lagdo Dam in Cameroon and from my understanding the water has not been released yet and we are experiencing serious flooding in our dear state.

When this waters is released and the drainages are still not constructed while we await the dredging of river Benue what happens to the people who are not affected by the current flood but live in places that are prone to the flood. Where do our faith lie. We are in trying times in Benue we need more hands on deck.

While we await the Federal Government to dredge river Benue lets all pray that the water that will be released from Lagdo dam does not cause more damage and havoc in Benue. For we’ll lose more than just 900 hundred hectares of rice in Guma.

One thought on “Dredging River Benue”