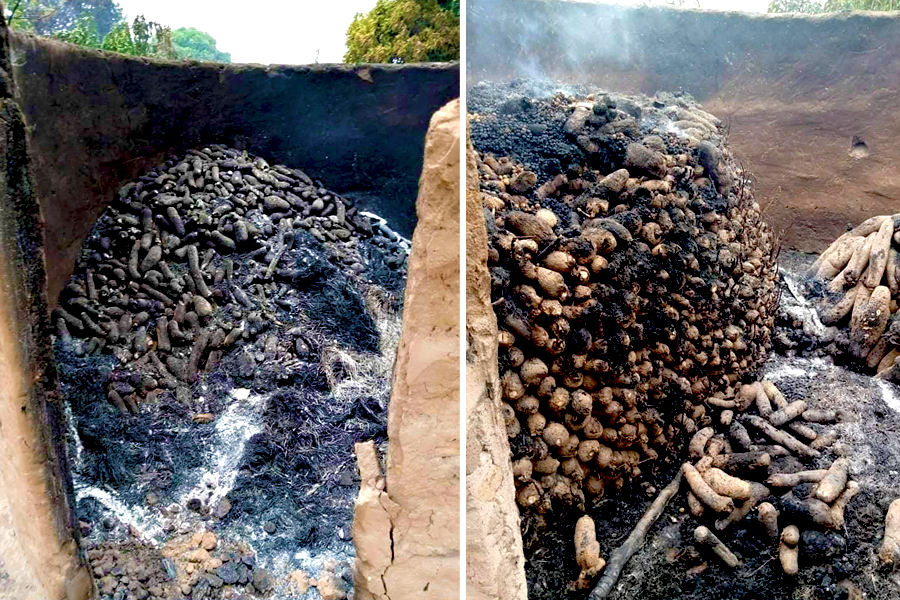 A Voyage to the Displaced People of Jootar

Jootar is a border semi-urban settlement in Mbayenge council ward in Mbaterem, Ukum Local Government Area of Benue State. From Jootar to Wukari in Taraba State is just about ten kilometres.

Jootar is home to Ukum people of Tiv extraction in central Nigera. The economic mainstay of the locals is farming – not just farming but various species of yam. Post-harvest yam produce are eaten, sold and stored by the people. On a normal day, several trucks of yams are bought in the Jootar market.

They are a peace-loving people, hospitable and receptive. This is the place I visited on Monday, May 18, 2020. I took off from Makurdi, the Benue State capital and boarded a Zaki Biam bounded bus via Pleasure Travels.

At the Zaki Biam terminus of Pleasure Travels, I alighted from the bus and decided to take a stroll from there to the Wukari junction. As I walked, I saw hundreds of people selling and buying yams not in the Afo but they were clustered in residential homes around the Afo.

At the Wukari junction, I got a vehicle that was going to Kyado. From Zaki Biam to Kyado is about forty kilometres. I got to Kyado and I was handed over to another driver who was going to Jootar. Jootar and Kyado stand away by ten kilometres and I paid a hundred naira as fare.

When the vehicle finally halted at Jootar, the driver said in a friendly manner that we have reached because he suspected I was a stranger. Since I didn’t want to ask questions, I hung my backpack and entered a street between the Jootar market a petrol station.

Walking up the streets, I was suspected. Therefore, a man who had suspected me took his motor bike and was following me behind. But I didn’t know I was been followed. Soon, I heard a voice behind, “u pande ver” meaning “good afternoon”. And I responded in same language.

The man was friendly. He asked where I was going to and I told him my mission to Jootar. I told him that I heard of the attack on Jootar and I was coming as a concerned citizen to see things for myself. Still he was not so much convinced. He directed me to a place that was about quarter a kilometer ahead. Before I got there, I saw a number of persons about twenty. More so, before I got there, my issue was tabled, analyzed and decision taken that “I must explain my mission beyond reasonable doubt before I would be allowed to go round”.

I explained myself and mission to Jootar. One of them joked that I was dark-skinned as one of their attackers. This was a huge joke. Indeed, as a boy, I was very much darker and I used to be tongue-lashed as such. Then I used to cry.

However, even after reasonably explaining my mission, they did not talk to me. They rather called Jacob Mmulega Ayarga. Ayavga was elected a councillor of Mbayenge council ward during the 2017 local government council elections. In addition, they also called Orveren Tordue, Director, Jootar Market Operations. These were the people that officially spoke to me about the latest attack on Jootar.

The Latest Attack on Jootar

Mmulega Ayarga and Orveren Tordue in their separate narrations were unanimous that the attack took place on April 8, 2020. According to them, on that said date, Jootar was still calm and peaceful until about 5:05 am that they began hearing some unusual sounds. They were alert because they were suspecting an attack from Jukun militia. Sooner than later, they saw the militia crossing the Ungwa stream advancing Jootar and started shooting sporadically.

At this point, words went round the settlement that there was trouble. People started scampering for safety. They were helpless and the best they could do was to call the commander of Special Force, Zaki Biam whom they told me was gotten on the phone. Remember, I had said earlier that Zaki Biam to Jootar is about fifty kilometres.

The Level of Destruction

The invaders of Jootar were well armed. They sacked the entire settlement and killed about three people. They are namely; Orfega Vangeryina, Msughve Mzuultyo and an unidentified person. More than three people were injured and not less than two persons were taken captives.

In addition, not less than three hundred and thirty nine (339) homes were destroyed including yam barns of uncountable yams, many economic trees burnt and other valuable worth millions of naira were destroyed.

A Brief Overview of the Jukun Tiv Inter-group Relations

Many historians and inter-group relations’ experts have argued that “the Jukun are the Tiv neighbours who for as far back as C.1800 lived and intermingled inseparably”. It is further buttressed that the Jukun benefitted immensely from the good neighbourliness of the Tiv. For instance, the Tiv in 1864 during the reign of Agbumanu and Awudumanu as Aku Uka saved the Jukun from their enemies. In 1906, the Tiv defended Jukun in Abinsi. The military assistance and relationship made the Jukun king, Aku Uka to appoint a Tiv man to serve as his military advisor (James Nyitse).

In the later years, the Tiv lived with the Jukun particularly in Wukari. They lived as brothers sharing social, economic, religious, cultural and political platforms. That was why in 1958; Mr Tangur Gaza defeated Usman Sangari, the Jukun candidate, to represent Wukari Federation in the House of Reps while Mr Simon Iyortyer Musa in 1982 was appointed chairman of Wukari LGC.

In 1983, the Bamaga Tukur led administration of the then Gongola State appointed Dr Samuel Tor-Agbidye as a commissioner and Emmanuel Yawe as chief press secretary. These people were Tiv. More so, Simon Awua and D.K. Mtuem were elected into the Gongola State House of Assembly and Hitler Gba-Aondo and Tsetim Gwaikyaa represented Takum and Donga federal constituencies respectively.

This was how cordial the Tiv and Jukun peacefully interrelated.

A Brief Overview of the Jukun Tiv Crises

There are many reasons why hostilities exist between the Jukun and Tiv people. Tordue Nyitse in his work “State Intervention in Community Conflicts in Nigeria: A History of Jukun-Tiv Relations” has identified them as follows;

All these factors put together caused the first attack on the Tiv in Wukari in 1990 prior to local government council elections. The Tiv fled and did not participate in the election. The attack was followed again in 1991. Another vicious one was coordinated and executed in 2001 in Wukari and it was sustained until many places including Jootar was attacked on September 10, 2001.

Reason for the Recent Attack

I was not able to reach the Jukun side and hear their own side of the story for fear of been killed but from the indigenes of Jootar, they believed that they were attacked because some fleeing Tiv people from Taraba State were settled in Jootar and in other to further disperse them, hence the attack.

Another reason they advanced was the boundary issue. The boundary between Jootar in Benue State and Wukari in Taraba State has been an issue of dispute since the arbitrary manner the Justice Nasir Boundary Adjustment Commission handled the matter.

After the April 8, 2020 attack on Jootar, there is a detachment of an army camped at Kingdom Nursery, Primary and Secondary School Jootar. As at the time I visited, Jootar was calm and peaceful. The locals confirmed to me that the soldiers are not harassing them.

I was also informed that since the attack, they were visited by the senator representing Benue North-East which also covers the area, Gabriel Torwua Suswam. Senator Suswam according to them came with the House of Reps member for Ukum, Katsina-Ala and Logo federal constituency, Richard Gbande, the Benue State House of Assembly member for Ukum State constituency, the commissioner from Ukum local government and the local government council caretaker committee chairman.

Impact of the Crisis

You may also want to read:

I want appreciate in a special way my brother and friend, Akaa Fele who facilitated the journey. You are wonderful and patriotic. All my informants at Jootar who did not only volunteered information but took my round to assess the level of destruction. I am most grateful.

I also want to specially appreciate my comrade and friend, Jacob Ternenge Nevkaa who insisted I should not travel in the night provided dinner and accommodation for me at Katsina-Ala on my way back and the beautiful Kumashe U Sankera, Torkwase Grace Yaapera for the warm breakfast.

3 thoughts on “A Voyage to the Displaced People of Jootar”