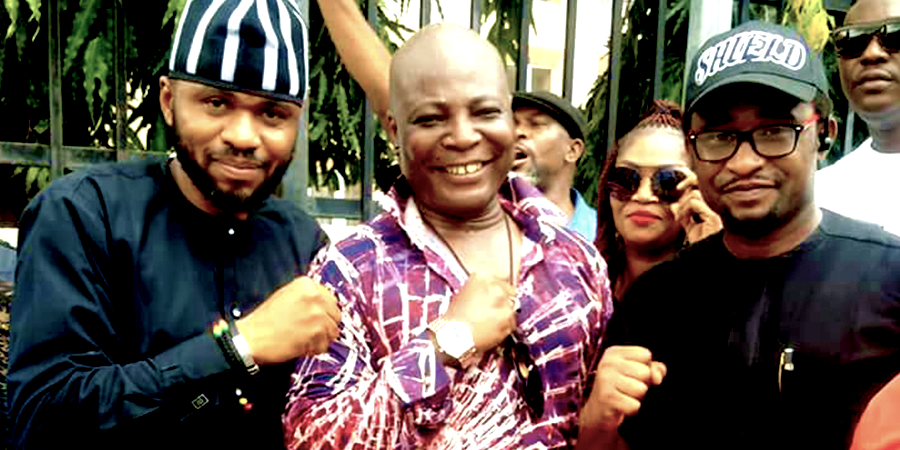 Charles Oputa, a.k.a Charlyboy, on Monday led his `Ourmumudondo’ Group on a peaceful protest to the Federal Ministry of Justice, demanding the proscription of ‘’Killer herdsmen” across Nigeria.

Charlyboy (middle) flanked by memebers of the ourmumudondo movement on a peaceful protest to the Federal Ministry of Justice on Monday.

Newsmen report that the Group is a non-political coalition of Nigerians from all backgrounds who advocate for national reawakening, towards holding leaders responsible and ensuring good governance at all levels.

According to Charlyboy, the protest is to urge the Minister of Justice and Attorney General of the Federation, Abubakar Malami, to declare the group as a common enemy of Nigerians.

“We are extremely concerned that the survival of Nigeria is currently being threatened by these killer herdsmen, as innocent Nigerians are being slaughtered in different parts of the country on daily basis.

“In 2018 alone, hundreds of innocent Nigerians were cut down by this group, and hundreds of communities are affected by the wanton destruction of human lives and properties.

“We, therefore, urge the Ministry of Justice, the nation’s highest custodian of law, to immediately take firm action towards getting Federal Government to proscribe and designate the killer herdsmen a terrorist group in Nigeria.”

Charlyboy noted that since relevant government authorities had acknowledged that the killer herdsmen were foreign elements, who infiltrated the country, the group wants them declared as enemies of the Nigerian state.

He added that such pronouncement would give security agents the tenacity to fight it, and also help the nation to secure regional cooperation and support.

“We are not saying every herder in Nigeria should be prescribed as a terrorist, because the herdsmen everybody knows in this country do not carry arms and sophisticated weapons.

“Our president had publicly declared during his recent visits to the UK and U.S., that Nigeria was under the invasion of killer herdsmen from another country.

“It is, however, instructive to admit for effective action and intervention that there cannot be infiltration into the country by external forces without internal collaborators.

“Proscription of these killer herdsmen and their designation as a terrorist group will give Nigeria greater leverage to seek better regional cooperation and international support to confront this menace concertedly.

“Our security agents will collectively go after them and also investigate their line of funding, to unravel those who are secretly colluding with the group,” he urged.

The group added that as the 2019 general elections was drawing near, there was need for Nigerians to be assured that they were safe to come out to exercise their civic rights.

Charlyboy then handed over a letter containing the group’s grievances and demands, addressed to Minister of Justice and Attorney General of the Federation.

Mrs Lola Uket, Acting Director of General Services in the Ministry, who received the letter on behalf of the chairman, commended the group for its genuine concern for peace and security in Nigeria.

She then assured the group that their demands would be presented to the minister.