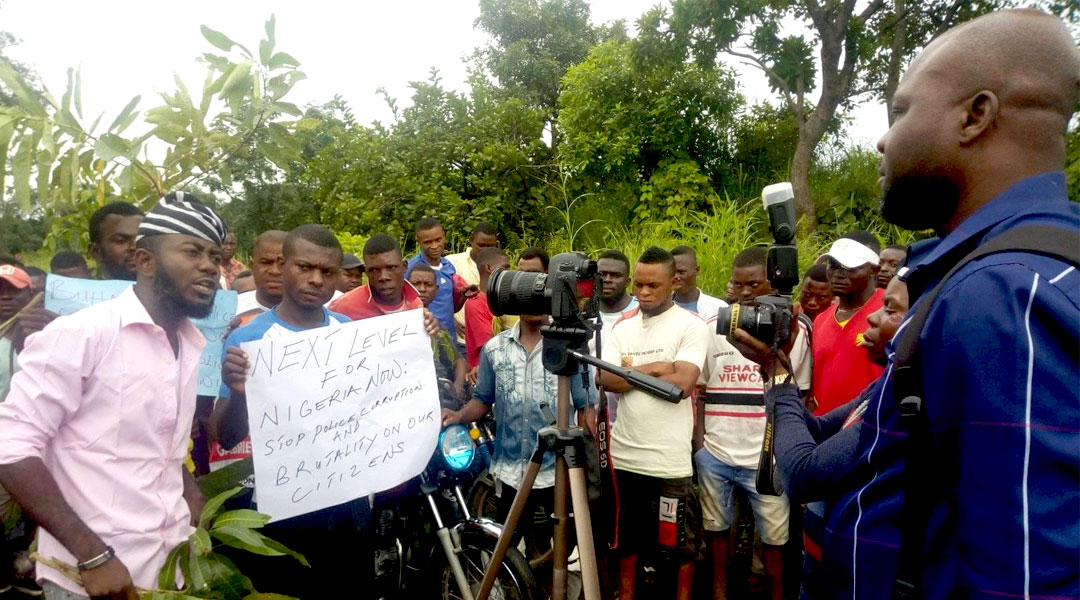 Kwande Youth Council yesterday led a massive protest in Ikyogen area of Kwande local government, Benue state calling on the Federal government and the Inspector General of police to arrest and bring to book the police officer who killed one commercial cyclist and fractured another because of their refusal to part a bribe of #100 naira.

The protest that was championed by the leadership of Kwande Youth Council, President Aloko Nachi Simon started at the scene where the two commercial cyclists were shot leading to the death of one and the hospitalization of the other was accompanied by Terseer Fabian Yaga (KYC Vice President), Orkuma Adzua Ikyur Madah (KYC Publicity Secretary ), BEMOA president Ikyogen branch, youths and Ikurav-ya traditional rulers as well as Ikurav-ya Development Association leadership. The protest began by 10 am in the morning and ended by 2 pm where the surviving victim is receiving treatment. The president KYC called on the spirit of the dead to bear Kwande Youth Council witness for standing behind him even in death.

The protest which was covered by TVC News, Channels TV, Galaxy and AIT was very peaceful and all those interviewed expressed dissatisfaction with the action of the police for brutally ending the life of a sincere young man who even in death remain a registered member of Ikyogen Motorcycle Association.

The President, Ikurav-ya Development Association and other interviewers called on the Federal government to pay the sum of #100, 000,000.00 to the deceased family and another # 100,000,000.00 to the fractured victim.

In a unanimous voice, the people of Kwande pressed forward that the perpetrators of this evil act must be brought to book in order to avoid the further occurrence of such actions against the good people of Kwande by members of the Nigerian Police Force who deviated from protecting lives and properties to the deliberate shooting of innocent people.

Summarily Kwande Youth Council calls on the government and Law Enforcement agencies to curb the menace of police brutality by ensuring that justice is done and the perpetrators of this act brought to the full weight of the law.