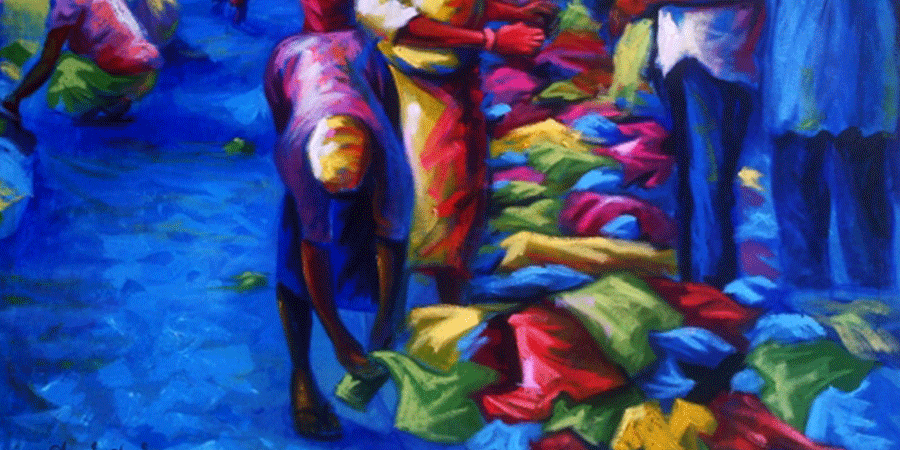 Little did Onyemowo know that she will be caught red handed at the Okota bend down select market where she always steal second hand clothes often. She thought her evil wisdom will help her for long, but she seemed to have forgotten that 99 days for the thief and one day, just one day for the owner.

Many ladies and women were in the market that hot Monday afternoon picking one thing or the other. There were things like, tops, skirts, trousers, bras, vests and so on and each trader screaming prices at the top of their voices to the hearing of everyone around. Most of the traders had just opened the bale of new arrivals and there were lots of things to pick. While people were buying and selling, Onyemowo went round with a black polythene bag picking one item or the other without paying for them.

At first, no one noticed her due to the crowded market. Everyone was buried in what they were doing. Young girls smiling at some nice pants and bras, while women buying clothes for their kids. Onyemowo went from one trader’s stand to another picking sexy bras, pants and night gowns and tactically putting them in her polythene bag without being noticed.

Suddenly, one of the traders started saying, “if anyone see any girl picking items without paying for them, they should let her know, we have all seen her.” And he further said, “tell her you have seen her and stop gossiping about her.” Many of the buyers did not understand what this trader meant, so they continued selecting and bargaining.

Slaps were heard and everyone around turned to the direction of the sound, and there sat an innocent teenager in her mid-teens in front of the traders with her black polythene bag on her head. One of the traders pulled off his belt and lashed at Onyemowo. As he flogged her with his right hand, he slapped her with his left. Everyone felt pity for her, as he continued beating her, more sights were attracted. Then, a pregnant woman who was also picking some baby items shouted at the top of her voice to everyone’s hearing, telling him to leave the girl alone.

“This is twenty-first Century, men don’t beat women again. Instead, punish her.”

A young trader seized the polythene bag from Onyemowo’s hand and brought out all its contents which were mostly sexy pants, bras and night gowns. Everyone around were amused. Then, some of the traders asked her to leave the market immediately before she is publicly embarrassed. Her face was in her palms as she walked out briskly out of the bend down select section. She passed by an old man and he gave a “stinky” slap and he pushed her forward almost making her loose balance.

Onyemowo cried all the way home, she cried, all day in bed and she vowed never to steal from anyone again. She must learn to put away the habit of stealing and pray against kleptomania. She cried and prayed to God; In that mood, she was captured by the strong hands of sleep.